In 2012 we embarked on two hydro projects to produce green, CO2 free electricity from a renewable sustainable source, by utilizing the areas’ high rainfall and the steep valley topography of the Upper Ystwyth Valley. Most of the excellent construction work was undertaken by a local contractor - T.T.S. Tregaron, and his staff of local people. Whenever possible the materials were sourced from Welsh businesses.

In line with The Environmental Agency Wales recommendations, we draw water from a weir in the upper reaches of the river Ystwyth. It flows through an 838mm penstock pipe buried in an old disused water leat for 1400m. The water runs into a100kw Gilkes Turgo Turbine and returns back into the river just below the turbine house.

The disused water leat was constructed about 120 years ago, and used until the 1930’s to carry water to drive the stone crushers at the Cwmystwyth Lead Mines. The total length of the leat was over 4 miles.

This scheme has been built fairly close to the farmstead. The water drops 210meters from Nant Cwn Gorlan high up on the hill side, and flows through a 300mm pipe for a distance of 875m. This feeds 100km Gilkes Pelton Turbine and then the water returns into the stream.

In the 1940’s there was a micro hydro power scheme being used to generate electricity for the farm and farmhouse, this again was driven by a small Gilkes turbine, but this became obsolete in the 1960’s, when the Mains electricity was introduced to the area. The old small turbine can still be seen on site. 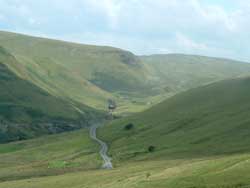 The mountain road passing the cottage, from Rhayader to Aberystwyth has been considered by the A.A. as one of the most scenic routes in Europe.